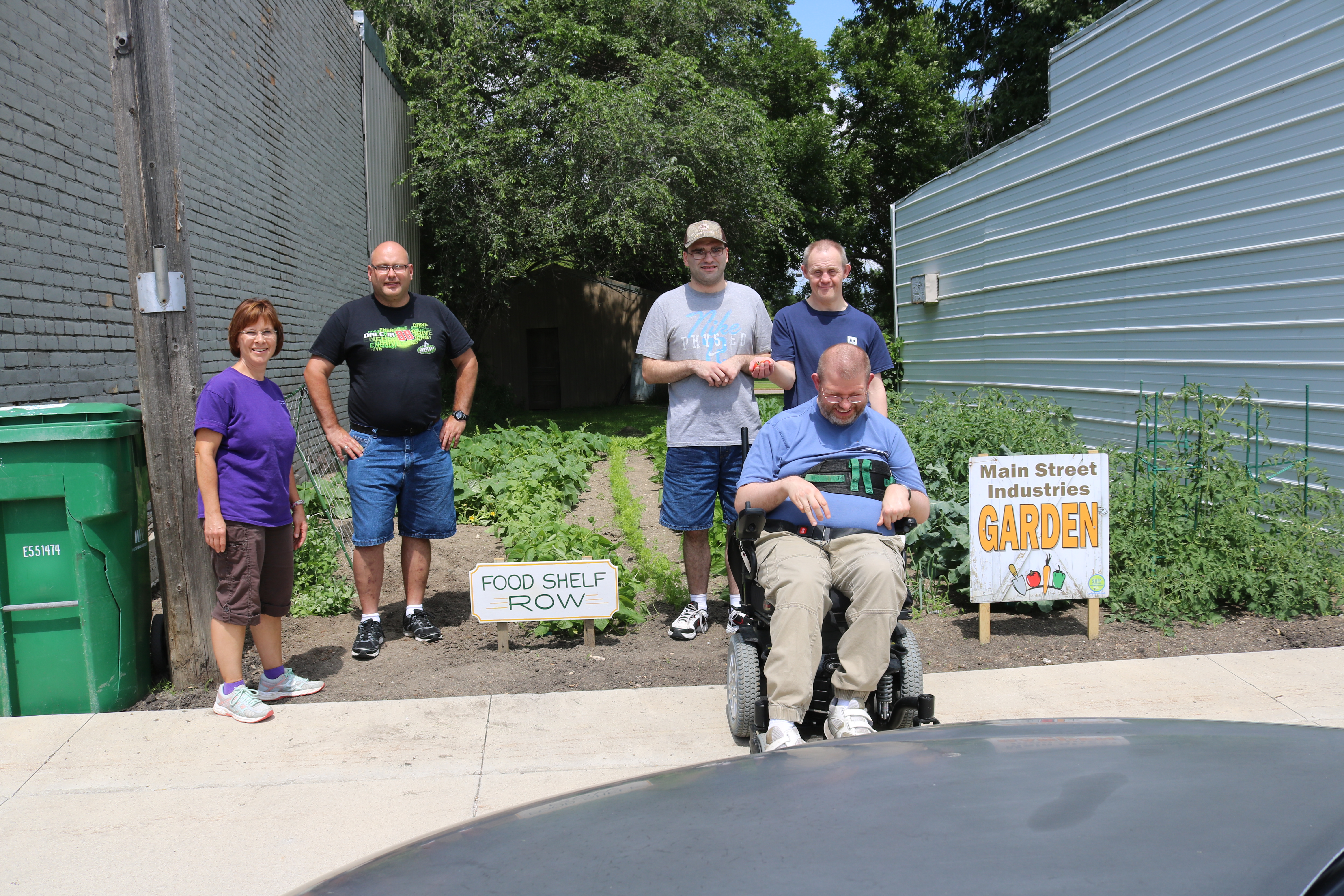 Story and photo courtesy of The Northern Star Newspaper

MAIN STREET INDUSTRIES GARDEN is a new attraction on Clinton’s Main Street this year. The location was an empty lot, owned by Wally Sayles, who gave them permission for this great addition. Lisa Sayles, MSI Direct Support Professional, is pictured with some of the MSI consumers who have been involved in the project. The signage was provided by SHIP, a state program through the Minnesota Department of Health.

MainStreet Industries in Clinton is a very busy place year-round. This summer they increased one project to include a vegetable garden on an empty lot on Clinton’s Main Street.

In partnership with SHIP (Statewide Health Improvement Partnership), which is under the Minnesota Department of Health, they were able to use SHIP’s $3,000 grant along with MSI’s funding to construct a patio in the front of their building. They also constructed – in-house, raised garden beds for their use.  Unfortunately, the MSI Greenhouse that had been constructed at the rear of their building was totally damaged from the past winter’s heavy snow.

Lisa Sayles, a Direct Support Professional at MSI, wished they could have a garden spot to plant a  garden. Her father-in-law, Wally Sayles, owns an empty lot on Main Street, and gave the OK for a garden there. Brent Olson began the tilling project. Wally talked to Bob Rinke, who came in with his tractor and donated his tilling services to the project. They also have a rain barrel and Lisa’s husband Dave provided them with another one.

SHIP encourages increasing access to fresh, local fruits and vegetables, so this project fit the qualifications to a tee. There are many statewide projects receiving assistance through this program – all in the interest of the improvement of its citizens health.

The program encourages increasing access to physical activity opportunities at schools and child care facilities, and works with state towns and cities, as well as employers and health-care sites.

SHIP representatives hold quarterly meetings, which Lisa attends, and they are encouraged to use healthy foods and wellness programs for their consumers.

MSI’s recent auction and supper is one of the ways they raise funds, as well as their work projects and services.  This year they are raising beets, potatoes, onions, lettuce, peppers and radishes in their raised beds, which were built in 2018.  While the late spring caused a delay in the garden project, as you can see by the photo things really grew well in their Main Street Garden. Here they have planted zucchini, squash, watermelon, pumpkins, red onions, snap beans, broccoli and cauliflower. They have been the recipient of donated seeds and also purchased seeds and plants.

They have signage designating their project, with some being produced to donate to the Big Stone County Food Shelf.  As a side-note, make sure to check out the “Can You Recall” feature on page three of this week’s Northern Star – gives some history of the empty lot.

The garden is getting a lot of attention as folks travel along Clinton’s Main Street – and now the MSI consumers, staff and others are just getting anxious for harvest!