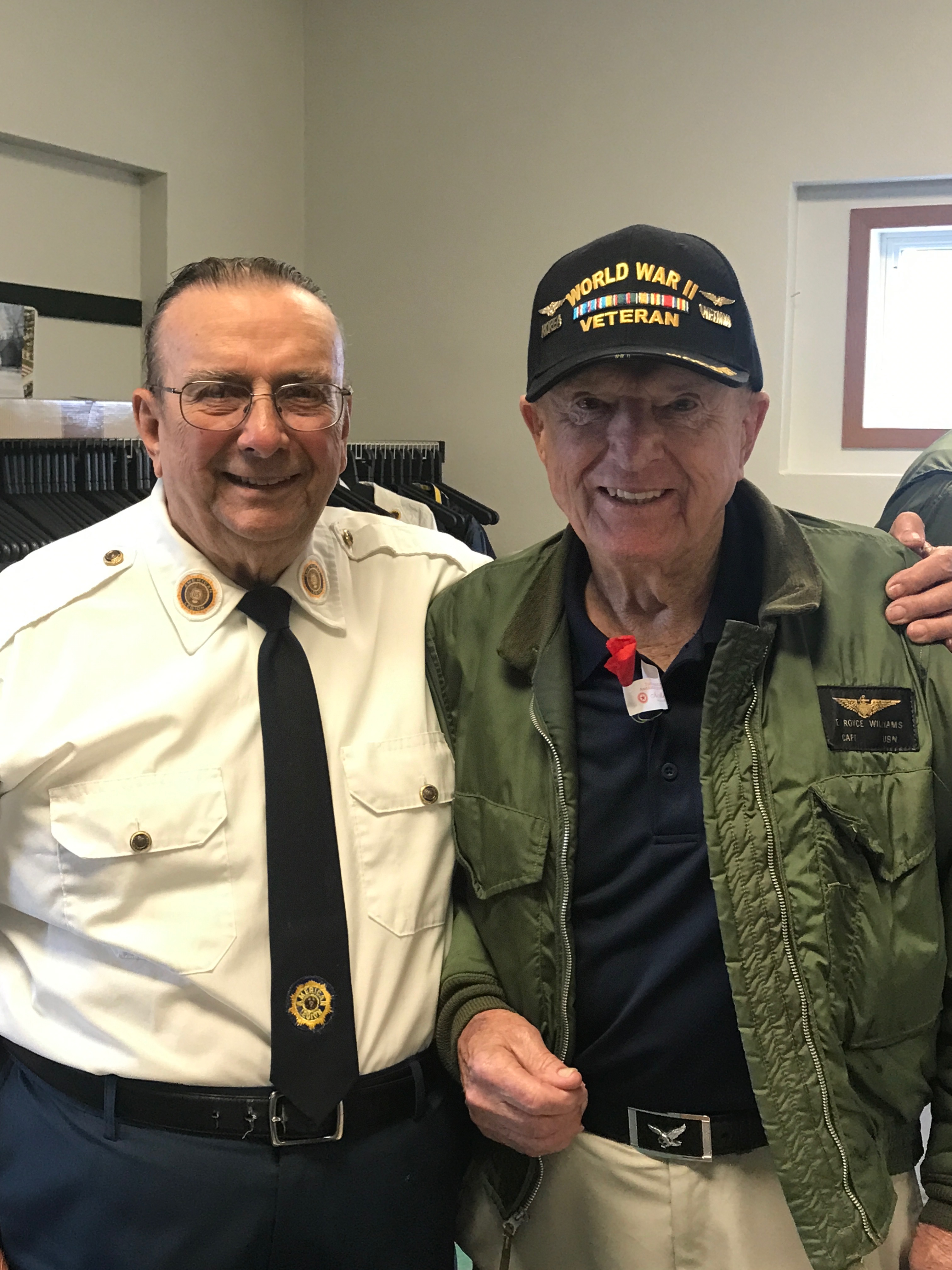 Captain E. Royce Williams, USN, Retired, a native of Clinton, MN, was recently honored for his heroic actions during the Korean War.  A replica of the F9F Panther sits in a display at the USS Midway Museum and they dedicated the cockpit to: “CAPT Royce Williams, Korean War and 4 MiG kills” painted at the side.  Royce gave a private presentation to the Docents on the USS Midway and followed with a question and answer session.  They presented him with a certificate and a model airplane. Docent Council Vice Chair Sam Armsdoff, stated, “Trust me when I say that all of us on the USS Midway Museum are deeply appreciative of Royce’s distinguished Naval Service and were ecstatic to help publicize that to our guests!  Recognizing Royce’s accomplishments and organizing the tribute to him was a collaborative effort.” The docents are museum guides and volunteers.

The USS Midway docent council vice chair, Sam Arnsdorff made the initial suggestion to have CAPT E. Royce Williams speak at the docents monthly training forum.  Docent John Frugoni became the conduit to reach out to CJ Machado, the Producer of the short film, “Forgotten Hero” and subsequently Royce.  Docent Bob Breglio, the training coordinator, was pivotal in setting up the training schedule to accommodate Royce and promoting it within the ship. The certificate was brought to the President and CEO of the USS Midway Museum Rear Admiral Mac McLaughlin, to get it blessed and signed.

The certificate read: “CAPT E. Royce Williams, USN (Ret.)    In recognition and deep appreciation for your dedicated and faithful service to our country.  You displayed honor in remaining silent over your harrowing combat action over North Korea, courage in the face of overwhelming odds, and a lifelong commitment to the United States Naval Service.  These attributes epitomize the Navy credo and reflect on your distinguished service.  YOU WILL NEVER BE FORGOTTEN”  “CAPT Royce Williams–Your honor and courage and commitment to the United States Navy will NEVER BE FORGOTTEN”            -CV-41 USS Midway Docents

It was Admiral Mac’s idea to place the tribute to Royce on their display Panther on deck. C.J. Machado, a photo-journalist, who writes for the Homeland Magazine, continues her activities in support of Williams and all veterans and was involved in this recognition, as well.  The USS Midway was the carrier that the film “Forgotten Hero” was filmed.  Royce  served in Korea from 1952-53 (70 missions) and Vietnam from 1965-67 (110 missions).  His Korean missions were kept “classified” for nearly 50 years.

In August of 2018, more than 350 people, including American Legion members, other veterans, Junior ROTC cadets and military supporters attended an event featuring Williams’ story at the Indiana War Memorial in downtown Indianapolis. Greg Ballard, the mayor of Indianapolis and a Gulf War era Marine veteran, welcomed the crowd. “We’re in a building that was dedicated to the men who fought in the war to end all wars,” he said. “But tonight we honor a man who fought in the ‘Forgotten War.’ Heroes like Royce Williams must never be forgotten.” Filmmaker and photo journalist C.J. Machado presided over the 90-minute presentation, which included her 15-minute film, “Forgotten Hero.” (click the link to find the movie). “His story was secret for a long time,” Machado said. “It’s about time we honor our forgotten heroes. Not much is known about the ‘Forgotten War,’ the Korean War, so that’s why we decided to do the film.” Williams, 93, mingled with attendees, signed autographs and participated in a panel discussion. He recapped his experience, which also included landing his plane, minus its hydraulic system, on the carrier at roughly 200 mph – almost double the usual speed. Once aboard the ship, Williams was told not to share what happened with anyone. “There were NSA (National Security Agency) agents on board, and we didn’t want anyone to know,” he said, referring to the then-secret agency. “The information from radar and radio that they collected clearly showed those were Russian planes. Had this gotten out, it would have threatened World War III.”

Former Navy pilot Peter-Rolf Ohnstad, who traveled to Indianapolis with Williams and Machado, was awed by the turnout for the event.  “To me, it’s huge,” Ohnstad. “As a kid growing up, all I ever heard about was World War II. I had an uncle who served in the Korean War and received a Bronze Star but no one ever talked about it. No one knew he received the Bronze Star until he passed away. It was just the way the Korean War was – no one talked about it. It was a forgotten war.”

Ohnstad and Williams are members of American Legion Post 416 in Encinitas, Calif. Along with Machado, they take these infrequent but educational trips.  “In 2017 we  went to South Dakota and Minnesota, where he was honored in his hometown,” Ohnstad said. “Since no one knew about (the MiGs being shot down), we’re left to wonder: What would we have done if it had turned out otherwise, if we had lost four planes? What was our contingency plan? Nobody talks about that.” Gen. J. Stewart Goodwin, executive director of the Indiana War Memorial, noted the difference between homecomings for World War II and Korean War veterans. “When World War II folks came home, they were dancing in the streets, kissing the girls and there was a lot of celebration,” Goodwin said. “When our Korean War brothers and sisters came home, they saw no such celebrations.”

Noting that the memorial, which includes a museum, serves as an educational tool, Goodwin closed by talking about the importance of sharing stories like that of Williams. “We need to tell our youth about people like Capt. Williams,” he said. “We need to tell people about those folks who put their lives on the line, leave their families and put themselves in harm’s way to ensure all of us are free. We don’t live in freedom today because it just happened. It happened because of people like him and everyone who wore the cloth of our nation.”

Another event is being planned in May, “RUN FOR THE WALL taking the Forgotten Hero mission to DC in honor of CAPT E. Royce Williams, USN, Retired — 4 MiGs downed!!!! May 15-24, 2019” is being sponsored by American Legion Post 416.