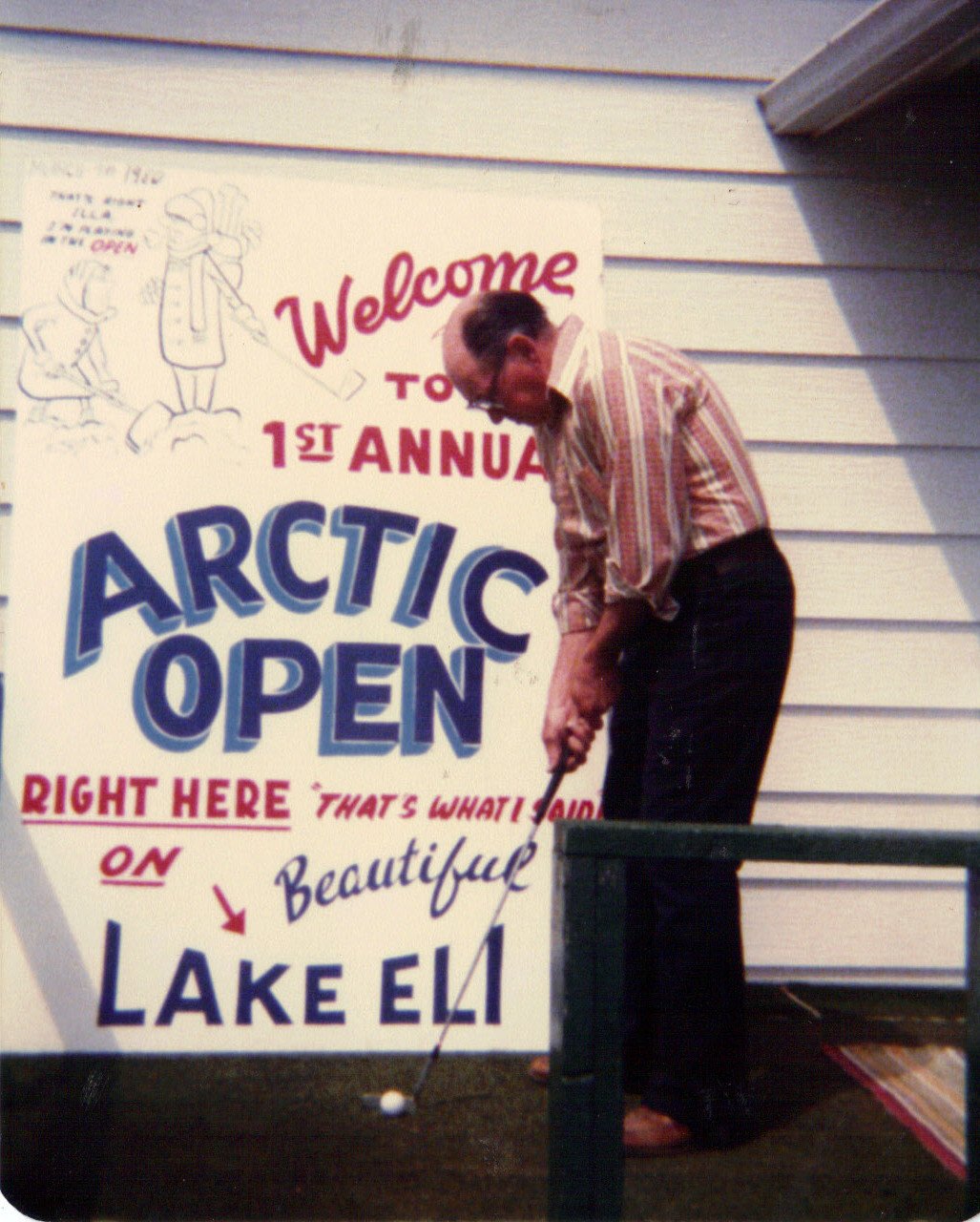 By Dillon Dwyer, The Northern Star and Ortonville Independent

There is an uniquely Minnesotan  tradition that takes place every winter in Big Stone County. The Clinton Community Service Club (CCSC) and other  local businesses host the Arctic Open, a six-hole charity golf tournament on the frozen surface of Lake Eli.

Ralph and Illa Strand  and Illa’s sister, Mrs. Manty Jallen came up with the original idea as a way to raise money for the Good Samaritan Center in Clinton. They pitched the event to Doug Anderson, Randy Stattelman, Curt Bystol and  Jerry Stattelman, who agreed with the idea and formed the original board of directors.

The first annual Arctic Open was held on March 9 in 1979. It featured fair weather and approximately 75 golfers. Judy Drewicke and Randy Stattelman won the event, but no prizes were given out. All the earnings from the afternoon were donated to the Good Samaritan Center.

“That first year was just so much fun for everybody,” Randy Stattelman said. “There were even a lot of people who weren’t golfers that participated.”

The Arctic Open grew bigger in its second year, but it wasn’t until the third incarnation that the button contest became a staple. The original prize for the drawing was half a hog donated by Brent Olson, but other prizes became featured throughout the years like shotguns donated by Randy Sigler and Dave Hauschild, or steak and shrimp dinners from Laguna Beach.

“The event just continued to evolve,” Stattelman said. “Eventually, the buttons were designed by the sixth graders at the elementary school. The teachers would bring the designs back to us without any names on them and we would vote on the winners at our CCSC meeting. The top design would go on the button and the top three would get their picture in the paper.”

The Arctic Open became an event for the whole family to enjoy, as the CCSC added a junior and putt putt tournament for youngsters and began hosting a dance following the tournament.

At the 2016 Arctic Open a wedding was even held on Lake  Eli on Arctic Open Saturday. Ron  Schlimme  of Clinton and Gail Ocshendorf of Dawson ‘tied  the knot’ at the 2016 Arctic Open. The couple was married by Pastor Richard Larson on the lake with family and friends in attendance.  The couple hosted  a reception at the Penguin Bar following their ceremony which was also very appropriate as that is where they first met.

In recent years, the attendance of the Arctic Open has been effected by weekend basketball tournaments, but  over the past four decades, even with other events taking place that day, the event has endured through everything thrown its way. Not once has it been canceled due to weather or accident.

“Conditions have ranged from  being too warm with puddles on the ice to having a -36 degree wind chill,” Stattelman said. “We have even had to adjust the rules to fit the weather over the years.”

The closest thing to a major setback that the Arctic Open has faced happened during a warm year when a hole melted in the course. The tournament was still held on the 12 inches of ice surrounding the open spot, but one hole was completely lost due to the thawing. People have also slipped on the ice or fallen into shallows near the cattails during warmer years, but no one has ever been seriously injured or hurt.

Over the course of 40 years, the Arctic Open has meant a lot to the people of Clinton. It has managed to raise approximately $2,000 to $3,000 each year and featured approximately 4,000 golfers and 2,400 holes of golf. The money raised has helped build a shelter at the Clinton Depot and the porch at the Clinton Care Center as well as support a scholarship fund for students at Clinton-Graceville-Beardsley High School. The event not only been a boon to the local economy, but also an excuse to get together with the family after a long winter inside.

This year’s tournament will take place on Saturday, February 9. Buttons are $5 each and available at Jamer’s One Stop, Bonnie’s Hometown Grocery, Amanda’s Shear Impressions, Downtown Diner and the Northstar Saloon. A button is  required to participate in the golf tournament and bean bag tournament at the Clinton Memorial Building.  Cash prizes of $100, $50 and $25 will be given away during the button drawing. The 2019 Men’s and Women’s winners will receive hand-crafted trophys and their names will be added to the Arctic Open Hall of Fame at The NorthStar Saloon. See the advertisement in the Northern Star for more information.