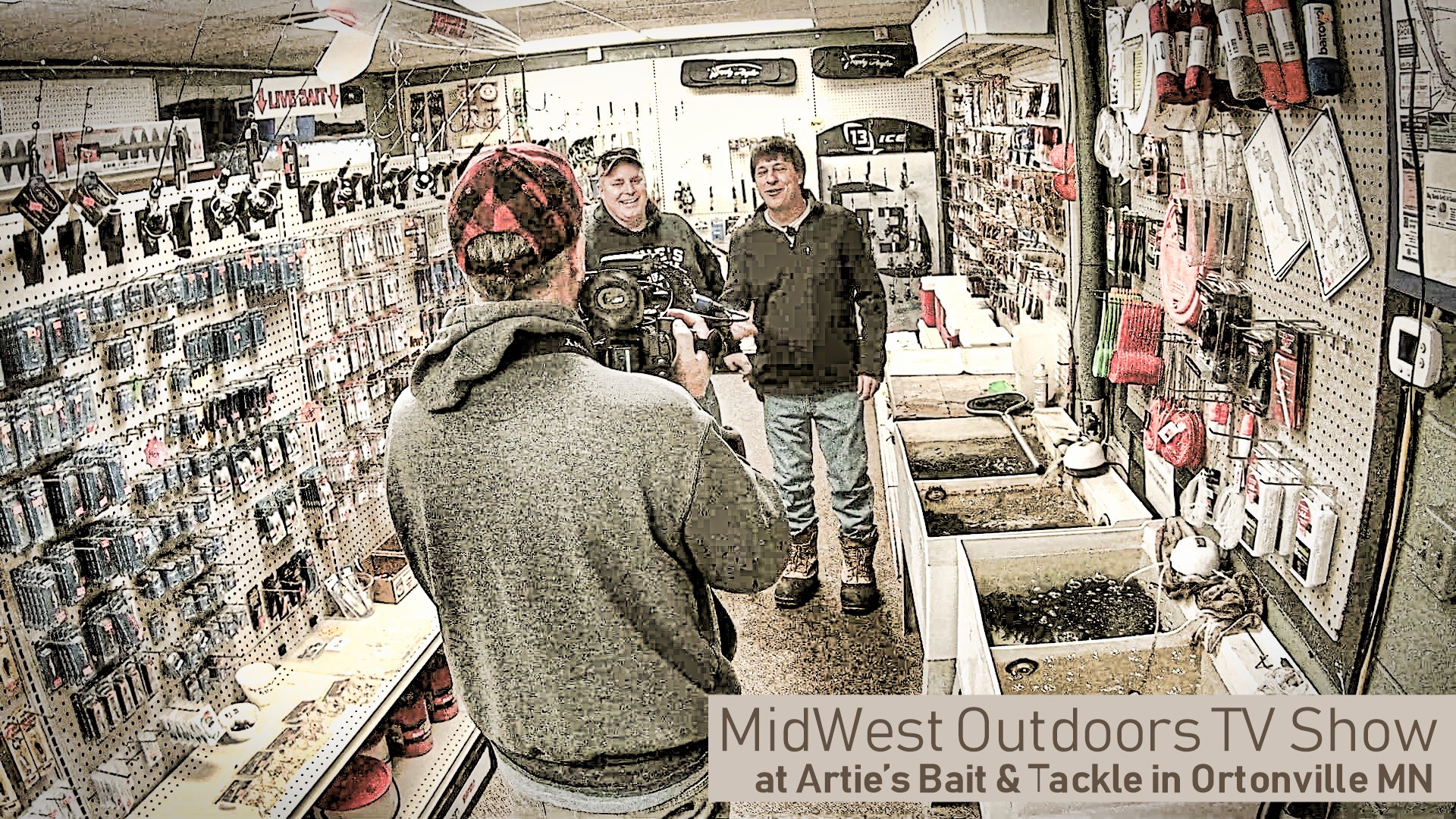 What brings two crews out to fish… Artie’s Bait and Tackle to shoot video for their advertising.  Since Artie likes to have them out when the fish are biting – it is probably a good time to head out to Big Stone Lake!  (I know my husband made good time getting home from work and straight out there tonight – unfortunately I’ve been sworn to secrecy when he is catching fish so that is about all I can say on that)

I find fisherman kind of a quirky bunch (obviously this may not be reflective of everyone’s opinion, here on the MNbump!) – they all want to know where the fish are biting, what bait & lure to use, etc. However, nobody wants to give out that information.  This makes Artie & his crew at Artie’s Bait and Tackle an awesome group to some… and traitors of sorts to others.  From my point of view, Artie’s marketing and the information that he shares is a very nice bonus for our area – and today was a good examples of that!

Artie told me that I could have 35 seconds to plug something for the Ortonville Economic Development Authority.  I wanted to catch a little video and a couple of pics of the guys that were here to make the commercials before they taped my portion so Artie said the first crew was meeting at the Bait Store at 6:30 AM today and heading out to the Lake from there.  I was there by 6:30 AM and there were several cars already there and a number of people inside.    I walked in and asked where Artie was… truly this is what happened… there was dead silence instantly as they looked at me like I’d just landed from another planet – I guess they were trying to figure out if I was joking… then they started laughing and said that “no” Artie had not been in yet.  I got the joke because I know Artie – but he had said to be there at 6:30!  They all arrived shortly after that and started to video a piece before heading out… watching the behind the scenes was fun – they have a very good time at this.  Their guide was anxiously waiting to get going so they didn’t miss the peak time for fishing… I told him that a good guide would find fish at any time of day (joking of course) — but I hear they caught some nice fish for the commercial – I guess he is a good guide because they didn’t get out any too early.

Just a little hint on where they were fishing… they left from the Schmidt’s Landing access.

Good fishing = great opportunity to let people know about Big Stone Lake and the area!  Last year’s fishing commercial included information about area restaurants and… well you can watch that one below.  This year has a few new topics.  One being my 35 seconds which actually took much longer than 35 seconds when you add up how many times I had to do it over.  I talked about living here… Ortonville Area Health Services, Fairway View Communities which sits on a beautiful 18-hole golf course and our 26 mile long lake with great fishing… and for jobs to check out MNbump.com –  (Thank you to Jon at OAHS for getting a few people together for a brief video clip) – I’m providing aerial photos of Fairway View and the golf course. — So thank you, Artie’s Bait & Tackle for promoting the whole area while you’re promoting your business on the fishing segments!  Much appreciated!! — and although I didn’t catch up with the other group that Tanner was fishing with like I had hoped, I’ve embedded a Facebook Post that they loaded from the day.

Today’s footage with Midwest Outdoors will be aired next December and January on Fox Sports North.   Check out their website & search Big Stone Lake for more videos.

Life is good, on the MNbump!